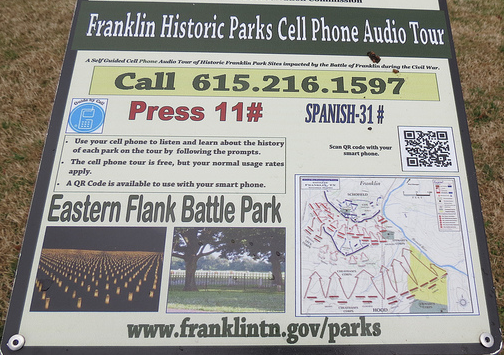 Formerly a golf course, the Franklin preservation community acquired this property several years ago. It is over 100 acres and is in the process of being restored to battlefield condition.  It lies just in front of the Carnton Plantation and flows up to the southeastern border of Leesburg Pike. This is the furthest most eastern flank that a large portion of the Confederate army (i.e., Loring and Walthall) crossed on its way to assaulting the Federal position near downtown Franklin.

One of the more poignant aspects of the Battle of Franklin is that hundreds of men in the brigades of Featherston, Scott, Adams, Quarles and Shelley swept across the Eastern Flank on their way to the Federal breastworks. As they headed for this great clash, many would have walked around Carnton and across the ground that now serves as McGavock Confederate Cemetery, thus walking over what would a year and half later become their very graves.

The Eastern Flank at Franklin, the former Franklin Country Club

What did Featherston’s men face as they got closer to the Federal line?

“Near the Harpeth River, Major General William Loring’s troops could begin to see the looming Federal line protecting Reilly’s division. Buford’s dismounted troopers and Brigadier General Winfield Featherston’s Mississippians advanced between the river and the Lewisburg Pike, their line bisected by the Central Alabama Railroad. To their left, the Alabamians of Brigadier General Thomas Scott’s brigade had fallen behind as they guided on the pike, the enemy artillery in Fort Granger contesting their advance. Suddenly, at a range of two hundred yards, the Federal artillery supporting Reilly’s line exploded, followed quickly by riflery from Israel Stiles‘ and James Casement’s brigades, six regiments of battle-tested Indianans. In a blinding flash, the Confederate battle line shivered as Federal iron tore trough the rebel front. Of the carnage, one Confederate survivor remembered, “Our troops were killed by whole platoons; our front line of battle seemed to have been cut down by the first discharge, for in many places they were lying in their faces in almost as good order as if they had lain down on purpose.”

“Featherston’s boys recoiled from the impact then pressed for war, but fifty feet from the Yankee line they ran into the impenetrable hedge of osage. Grown to a stinging thickness by the locals to control cattle, the hedge line now provided a perfect barrier against the rebel assault, too high to surmount and too dense to winnow. The Mississippians came to a halt, searching frantically for a way through the natural abatis. As they did, they became little more than sitting ducks for the Indianans across the way. Only near the opening at the pike were the Yankees slightly tested. A pitifully small set of survivors planted two Mississippi flags on the earthworks, but they were almost immediately killed or captured. One survivor described it as “a tremendous deluge of shot and shell . . . seconded by a murderous sheet of fire and lead from the infantry behind the works, and also another battery of six guns directly in our front.” It was, he said, a “scene of carnage and destruction fearful to behold.”

“Featherston’s right-most regiments crawled along the ground trying to find another way through the obstructions, but when they curled into the railroad cut marking Stiles’ left, the 120th Indiana plastered their van with musketry. Farther north, Battery M, 4th U.S. Artillery, began to spray the cut with canister, while Cockerill’s gunners in Fort Granger added their own plunging fire. Even a battery east across the Harpeth weighed in. Caught in the maelstrom were Buford’s troopers, belly down on the banks of the Harpeth trying to escape the murderous sweep.”