On June 18th at the Forrest Homecoming, members of the Civil War Talk message board will present to the management of the Forrest boyhood home a check in honor of Larry Cockerham. The funds collected will go to the preservation projects that Larry was involved there on the property. Because Larry was deeply involved in helping people learn about the ACW and sharing of knowledge about the war in Tennessee, a plaque will presented also. There will be several people from the Civil War Talk board that will have traveled from several states to be there. This will all take place June 18 at the Nathan Bedford Forrest Boyhood Home in Chapel Hill, Tn.

A small group of troubadours performed a few excerpts from a play called Scathe at the Williamson County Public Library today. The play is written by Dr. Deanne Collins (Ed.D). It is a historical drama based on a love-triangle in small town Spring Hill, Tennessee, in May 1863. It’s based on a true incident of Dr. Peters shooting and killing Gen Earl Van Dorn.

The drama troupe are all amateur actors. Collins is looking for corporate sponsors and support from residents in middle Tennessee. Her hope is to perform this drama (musical) annually, on the anniversary of the incident, starting in 2013. The play is presented in hopes of supporting the Tennessee Children’s Home in Spring Hill, TN.

For more info go to www.ScathethePlay.com or contact Collins at deannemcollins[at]bellsouth.net

Here’s a short vignette of Bakari King singing as a slave Madzura. 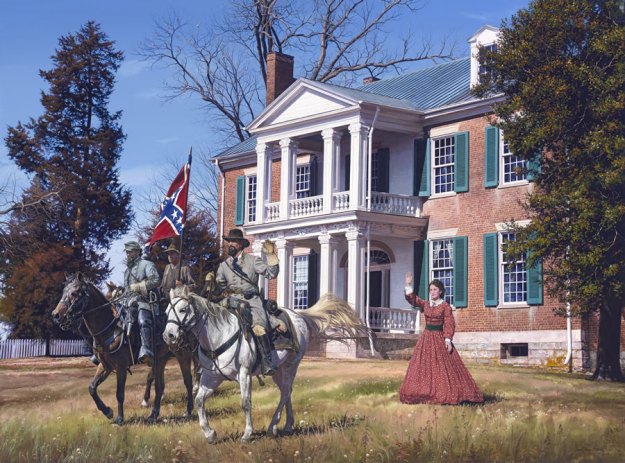 Strain’s likness of modern-day Carnton is pretty accurate. Here’s a picture of the the same basic view of Carnton that Strain interpreted for his painting.

Here’s a list of Confederate Generals who were engaged at the Battle of Franklin, Nov 30, 1864.

Well,  read the following diary account of a 115th Illinois Union soldier who records some comments of captured rebel soldiers in late March 1863 in Franklin. General Earl Van Dorn was active in Williamson County and Franklin at this time.  These Confederate prisoners of war are from Van Dorn’s army, more specifically, they belonged to Nathan Bedfort Forrest’s cavalry corps.

“I conversed a good deal with the prisoners while guarding them. They seem to be a very gentlemanly set of men and many of them intelligent. They say they and the majority of the army are willing to return to their former allegiance if they can be guaranteed their rights under the constitution. They blame their leaders as well as ours for misrepresenting the public sentiments . . . They are from Alabama & belonged to Van Dorn’s command but under the immediate command of Forrest.”