This incredible tintype was offered on Cowan’s (October 2018). Though not related to the Battle of Franklin it is a superb example of a USCT soldier in uniform. The roughly 2,000 residents of Franklin, Tennessee in 1860 were  predominantly Confederate-leaning in their political ideology, as was most of Williamson County. The Fountain Branch Carter family, including his sons, were no exception.

A letter between Moscow B. Carter and younger brother Capt Tod Carter from March 1864 pulls the curtain back and gives us a very interesting look into the mindset of a typical Franklin family regarding their view of blacks fighting in uniform. It is often stated that the Confederacy widely supported blacks fighting in armed combat for their Cause. Yet such claims are anecdotal at best and mere fancy at worst.

What does the primary evidence show? This letter from Moscow Carter clearly reveals that the typical mindset of Franklin residents in Tennessee (c 1864) was one of complete disgust for blacks taking up arms in combat.

The letter was written March 1st, 1864 by elder brother Moscow B. Carter, who was 39 at the time. He addressed it to his younger brother Tod Carter (age 24) who was a prisoner of war at Johnson’s Island. Tod was a Captain in the 20th Tennessee Infantry and would die on his own farm within months of this letter.

Here is an excerpt:

We have for the first time during the Federal occupancy of this town, a Corps of  “nigger” soldiers, on as I heard a soldier call them the other day, “smoked Yankees” quartered in this vicinity. I think there is but a company yet though. I understand it will be increased to a regiment. Among the citizens there is a general feeling of disgust, and so far as I can understand men’s feelings, the officers and soldiers of the garrison are not a little chagrined at their presence.

The letter clearly reveals the disgust of the Carter family with the Federal army allowing blacks to take up arms. Carter even suggests that the general idea on the part of the community, as a whole, was one of disgust. This is in the Spring of 1864. The context shows that the disgust in question is not primarily because they were fighting for the Yankees. The disgust and chagrin is wider than that for Carter and perhaps for the community he lived in in 1864.

“But these were Federal black soldiers, not Confederate,” one might say. Besides the vacuous lack of primary evidence to support blacks fighting for the Confederacy (in uniform), one can hardly make the case for Southern slaves fighting for the Confederacy – even as late as the Spring of 1864 – when Moscow Carter’s letter reveals a disdain by a Southern/Confederate community for black Federal soldiers.

Had the Confederacy been generally supportive of blacks fighting for their cause in early 1864 one could almost imagine that Carter’s response to the presence of blacks Federal troops would have been something like, “Even though blacks (not Carter’s term) serve in uniform for the Yankees, our blacks (i.e., Confederate) are better and more devoted because …..”  But Carter does not state anything close to that because he clearly had a general disdain and disgust for blacks serving in the formal role as a soldier in arms.

The few blacks (i.e., slaves) that did serve in the Confederate army were mostly ones who accompanied their master into battle but were rarely mustered in like whites were, and given arms to fight. It’s simply a myth and a distortion that large numbers (i.e., tens of thousands) of slaves fought for the Confederacy, and Moscow Carter’s letter in March 1864 to Tod Carter tacitly proves that.

I’ll close with this point. A reply I often get to this discussion is that my view denigrates and dishonors the blacks who took up arms and fought for the Confederacy.  Rubbish.  What truly dishonors the fighting Confederate slave – and the evidence suggests there were very few (as in hundreds probably for the entire Confederacy) – is that tens of thousands of blacks are given “credit” for fighting for the Confederacy, thereby diminishing the authentic role of those who truly did. It’s similar to a soldier saying he fought at Franklin or Gettysburg because his unit was there, but in actuality his unit was on dispatch duty, guarding the railroad seven miles away.  Being near Franklin on November 30th does not equate with “fighting in combat” on the Federal line in front of the Carter House on that terrible day.

Kraig McNutt will be speaking about the amazing true story of the escaped slave Robert Smalls from Charleston, South Carolina, in the Fort Donelson Camp #62 SUV meeting Tuesday evening, September 27th at 7pm at the Fort Negley Visitor’s Center in Nashville.

McNutt has been researching the Small’s story for almost ten years.  This is a talk he has given many times and it is always well-received.

Robert Smalls (1839 – 1915) was born in Beaufort, South Carolina, on April 5th, 1839, in a slave cabin behind his mother’s master’s house on 511 Prince Street. In 1862 he escaped from Charleston harbor aboard a steamer called the Planter with his family and several friends too. The boat had to pass by five Confederate check-points and then surrender its contents to the northern Naval fleet out in the harbor where it was blockading the important southern port.

His escape succeeded and Robert would meet Abraham Lincoln personally a couple weeks later. Lincoln was quite impressed with a black man (slave) who had learned how to pilot and navigate the coastal waterways around Charleston. Lincoln rewarded Smalls handsomely with bounty-money and a commission into the Union Navy as a captain of a vessel – the Planter! He was the first black Captain of a U.S. Naval vessel.

Terrill, an African-American slave from Williamson County (TN), was an escort on General Chalmer’s staff during the Civil War.

Presently, it is not known when Terrill began his service on Chalmers’ staff.  The following excerpts from Confederate Military History, vol. IX, p. 244 excerpts some of the service of  Gen Chalmers, therefore, Terrill would have likely seen some of this action, depending when he joined the staff.

He entered the Confederate army as colonel of the Ninth Mississippi regiment of infantry in 1861.

On February 13, 1862, he became a brigadier-general in the Confederate army, and on April 6th was assigned to the command of the Second brigade of Withers’ division, army of the Mississippi.

He and his command did splendid fighting in the battle of Shiloh.

When Bragg advanced into Kentucky in the summer of 1862 Chalmers’ command was a part of his force, performing its duties with courage and zeal.

In the battle of Murfreesboro he and his men again rendered brilliant service.  In April, 1863, General Chalmers was placed in command of the military district of Mississippi and East Louisiana.

In 1864 he was assigned to the command of the cavalry brigades of Jeffrey Forrest and McCulloch, forming the First division of Forrest’s cavalry.

General Chalmers bore a conspicuous part in the battle of Fort Pillow and in all the brilliant campaigns of Forrest in north Mississippi, west Tennessee and Kentucky, as well as in the Tennessee campaign of Hood.

February 18, 1865, he was put in command of all the Mississippi cavalry in the Confederate service in Mississippi and west Tennessee. 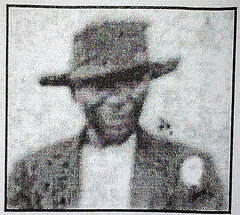 The following is a list of African-American slaves from Williamson County (TN) who served in the Confederate Army alongside their respective masters as body servants.

African-Americans in the Confederate Army typically served as body servants to officers or as general laborers.