Located just fifteen miles south of Nashville, Franklin held a strategic position in the Union’s line of communications and supplies as well as defense. To secure the Union garrison at Franklin, the army constructed fortifications on surrounding hilltops throughout the area, including a signal station at Roper’s Knob. The site served as an important communication post with visibility of six miles in all directions in the Harpeth River Valley. The fortifications at Roper’s Knob were constructed between April 19 and May 29, 1863. Approximately 5,000 men accomplished the operation. Each day two reliefs of 600 men worked eight-hour shifts until the work was complete. Captain William E. Merrill, U.S. Topographical Engineer, supervised the construction of the Franklin defenses. Upon its completion, Roper’s Knob had a redoubt for four heavy guns, inside which was a blockhouse that could hold sixty men. The fortifications also contained two 4,500-gallon cisterns and a large magazine. Merrill boasted that the site was so secure that “fifty men could hold it against 5,000.” 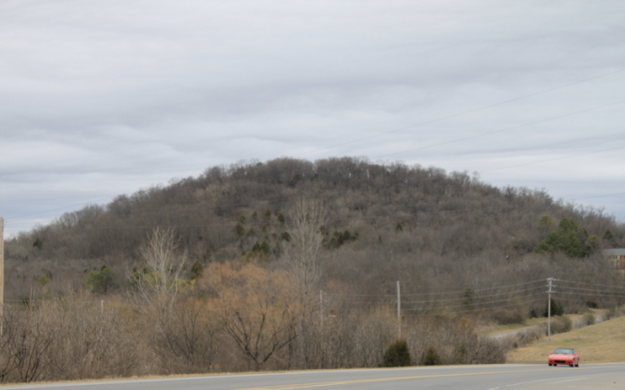 Well fortified, the signal station at Roper’s Knob relayed important communications to fortifications in Triune to the east and LaVergne to the northeast, and then to Nashville. Signal stations were important to the Union military effort as they transmitted information regarding the movement of Confederate troops to Union officers. Communications proved especially important during the 1864 campaign of Confederate General John Bell Hood through Middle Tennessee. It is unclear whether artillery was arranged at Roper’s Knob in defense of the Confederate mission, but records indicate that it was a possibility. The October 1, 1864 communications of Assistant Adjutant-General B.H. Polk to Major General Rousseau state, “I send down to Franklin this evening two 3-inch Parrots and 400 rounds of ammunition. Shall any guns go upon Roper’s Knob, or shall all go in the large fort?” 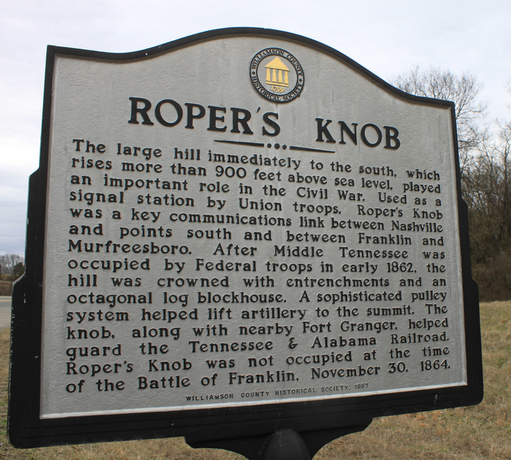 Following the Battle of Franklin on November 30, 1864, Roper’s Knob, along with the other Franklin fortifications, was abandoned by the retreating Federal army. After the Union victory at the Battle of Nashville in mid-December, Roper’s Knob was again reoccupied by Federal forces until the end of the war. The outer entrenchment and redoubt at Roper’s Knob remain clearly discernible and well defined, and have only experienced natural erosion. The high peak, with its commanding view of the surrounding valley, combined with the high integrity of the earthworks, conveys a strong sense of its historical period.

Today the 22-acre summit is owned by the State of Tennessee, and 36 acres of the south face was recently given to the City by the Heritage Foundation. An archaeological survey has been conducted by the State, but no interpretive plan has been prepared. The property is not open to the public, although Save The Franklin Battlefield (STFB) has gained permission to lead tours to the summit on several occasions.

View facing east. Roper’s Knob on left. Shute’s Knob on right. The main water spring in 1863 was on the south slope of Shute’s Knob.

Scot Butler served in the 33rd Indiana Infantry and the U.S. Signal Corps. By 1863 he was in the Signal Corps and stationed in Franklin, Tennessee. The following account is taken from“Affectionately Yours: The Civil War Home-Front Letters of the Ovid Butler Family.” Edited by Barbara Butler Davis. 2004.
“The Signal Corps holds communication from one wing to the other of Rosecran’s army. The station which I am on is situated on a hill near Franklin, several hundred feet above the surrounding country and its warlike occupants. From here we command one of the most beautiful landscape views I ever beheld. This is called the ‘Garden Spot’ of America. Away off to the north stretches a valley of unrivaled beauty. Alternate patches of meadow and woodland, its dashing streams, shining through the mist of morning like threads of silver, and the hills, ranged on each side, clothed with towering trees and stand like eternal sentinels over this scene of seeming quiet beauty and content. What a beautiful place was Franklin & its surroundings of elegant country mansions and extensive plantations before the hearts of the people were corrupted by political leaders, in their lust for power. Franklin is war worn. The shattered glass in her churches and school houses, her lonely streets and the closed shutters of her store houses, the battered doors and ruined machinery of her manufactories, and above all that deathlike, breathless silence, that absence of all sound, that can be felt no where but at the desolate hearthstone, here reigns supreme. Here and there a lounger attired in the butternut garb of chivalry, with hate gleaming in his eyes.” p: 27-28